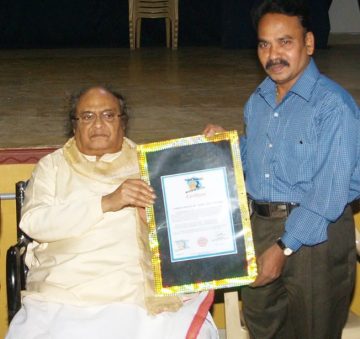 Darla Nageswara Rao (DOB: 12-01-1959), Artist in Government Central Press Hyderabad, Andhra Pradesh, the replica artist who had earlier wowed everybody by reproducing newspapers in calligraphy has produced a map of India with nothing but the word “INDIA” repeated in various colours all over the sheet. The work, which had begun on August 15, 2010, the Independence Day has been finished as a prelude to the Republic Day in 2011. He has written the name of the country a total of 36,628 times on a 65×90 centimeter drawing sheet using a six-point sized lettering. The map contains 356 rows, with the word reproduced 103 times in each row. He used gel inks and water
colours of four different hues namely red, blue, black and green to mark the boundaries of various states, and border in tri-colour. It took 320 hours to create the map.