MOST NUMBER OF BULLET BIKES PASSED OVER ABDOMEN 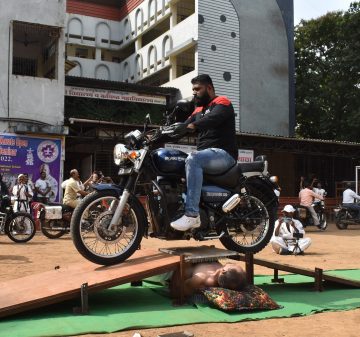 Shihan Chikkala Srinivas Rao (Born on 05/04/1965), native of Dombivali East, Thane, Maharashtra, India. He has made 503 Bullet Bikes to pass over his abdomen which was sandwiched between two wooden planks with nails on both sides. The 503 Bullet Bikes have passed in a duration of 11 minutes & 10 Seconds. The record was attempted on 16/05/2022 at S.V. Joshi High School, Dombivali, Mumbai. The High Range Talent & Stamina to make heavy bullet bikes to pass over his bare body has made Srinivas Rao to create a new World Record.