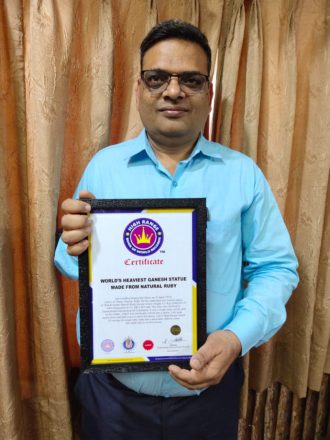 Jain Lalitbhai Kanaiyalal (Born on 4th April 1970), native of Surat, Gujarat, India. He has made heaviest Ganesh statue of Red & Green Natural Ruby Zoisite which weighs 121 Kgs (606250 CT) with dimensions 813 x 508 x 203 mm. The ruby was certified by Transnational Gemmological Laboratory. It was a rough stone earlier held by his father , which was artistically carved into a statue. Lalit took nearly three and half years to carve this statue. Lalit’s High Range Talent of carving the rough ruby stone into a admirable Ganesh statue has made him to set this record.