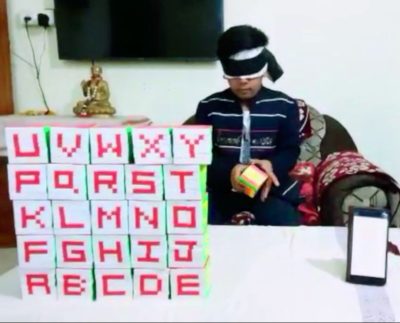 Prajwal Manoj Goher (Age: 9 Years and 8 months), S/o Pradnya and Manoj Nawab Goher, native of Aurangabad, Maharashtra, India. He has solved the rubik cubes of 7×7 in the form of 26 letters in a Alphabet, blindfoldedly in a duration of 5 minutes & 43 seconds and thus achieved the World Record title as the WORLD’S YOUNGEST & FASTEST KID TO SOLVE THE MOST RUBIK’S CUBES BLIND FOLDED. This record was attempted on 18th April 2021, at Aurangabad, Maharashtra. Prajwal’s High Range Talent of solving the rubik’s cubes blindfoldedly at a young age, has received many accolades.