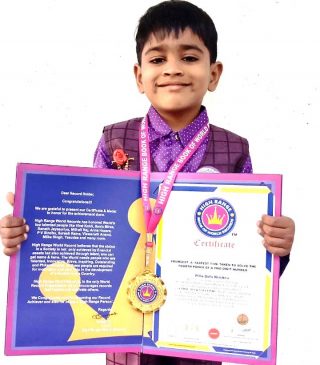 Pilla Dola Krishna (Age:5yrs), S/o Srinivas, native of Kovvur, West Godavari District, Andhra Pradesh, India. He was able to solve the fourth power of two digit numbers in just 4 MINUTES & 5 SECONDS. This record was attempted on 23 October 2021, at Kovvur and he was trained by his father Srinivas. This is second World Record in Mathematics he has achieved. The Dola Krishna’s High Range talent in solving the fourth power of numbers in fastest time at an young age has received many accolades.